South African Airways: Entertainment Before, During and After the Flight 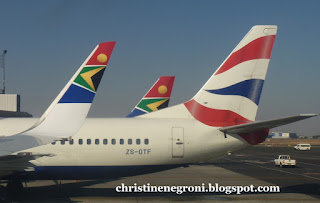 Saturday afternoon I flew from OR Tambo International Airport in Johannesburg to Cape Town on South African Airways Flight 347, to attend the International Air Transport Association Annual General Meeting. I was pretty sure it would be an on-time flight since Monwabisi Kalawa, the airline's new chief executive was on the plane. Of course he was in business class and I was back, way back in seat 27F.

What I did not know was what a great vantage point that seat would give me for all the goings-on before, during and after we landed in Cape Town. Here are some of the highlights with photos to match:
We started off in need of a tire change. 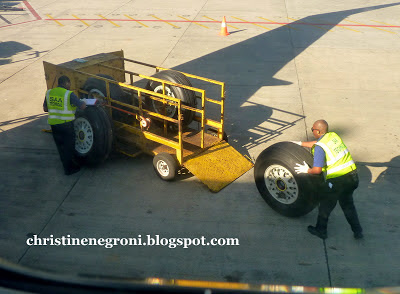 While that was going on, baggage handlers were loading the animals in the hold. We may be in safari country, but the critters were the ordinary, domestic variety - cats and dogs from what I could tell. 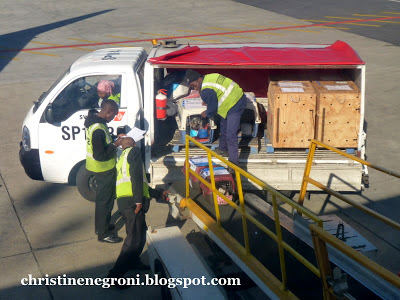 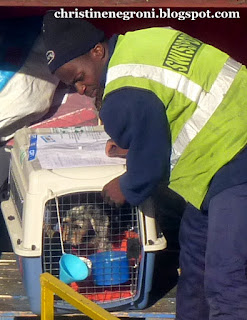 I thought for a moment that perhaps the bird strike volunteers were headed home for the weekend.

I was enjoying the colorful livery of airlines like flymango.com and Kulula ... 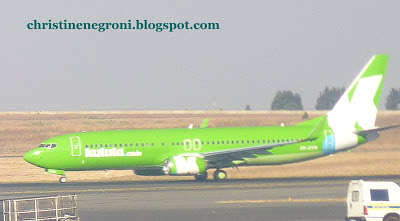 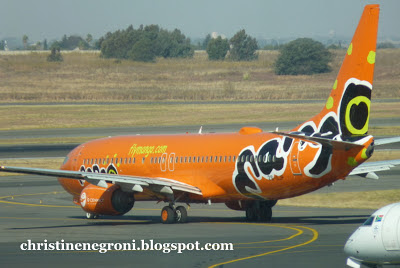 when what should touch down on the runway but an Air Zimbabwe Airbus A320! Did I count this airline out too soon? Maybe so. It's a shadow of its former self, but it started flying domestically and to Johannesburg in April of this year. 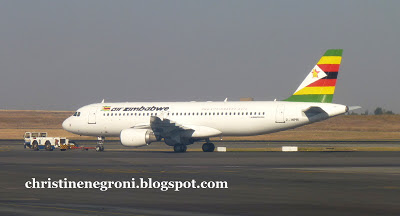 Well, my head was swinging around like a bobble-head taking in all this activity, when I noticed the man a few rows ahead of me oblivious to it all, reading the newspaper. Can you see the headline of the story he was reading? I was glad I didn't check my bag.

Somewhere approaching our destination, a fantastic sliver of clear sky allowed the setting sun to blaze through  - creating a sensational contrast between layers of clouds above and below the horizon. 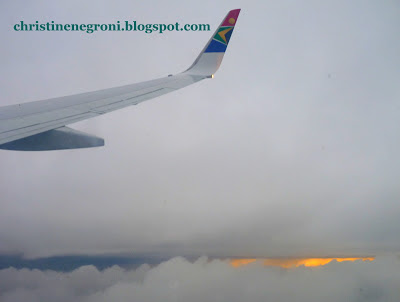 I would have called that an excellent flight right there, but more fun was in store for us on landing. Cross winds made it a rocking time right down to the pavement - then we slalomed across a very wet runway while I applied the brakes with both feet along with every other passenger as we all successfully assisted the flight crew in bringing our Boeing 737 to a halt.

Now, from my hotel in downtown Cape Town, I can watch the lightning and hear the wind and thunder of a winter storm.  Its dramatic, yep, but its going to take a lot of fireworks to top the excitement I've already had just getting here.
Posted by Christine Negroni at 3:50 PM

Excellent read over coffee at my desk this morning. (Permission to use your "Bird Strike Avoidance" picture in class, please?)

Locals have learnt the hard way to avoid sending any baggage through OR Tambo airport as the baggage handlers pilfer with impunity. No one accepts any responsibility for the thievery - which is a shame as it puts the country in a very bad light - both the thieving as well as the apathy.

It is great to entertain the passengers during the long time period of the flight. If they have good travel through the South African airways they would simply prefer it to others.