It is a testament to the considerable film-making skills of Kristina Borjesson that the TWA 800 documentary she produced had me actually paying attention to Thomas Stalcup, believing for some of the 90 minutes I watched the program that he actually had discovered something new.

With great enthusiasm Stalcup and former National Transportation Safety Board investigator Hank Hughes present radar data that they say is the “smoking gun” in their efforts to cast doubt on the official cause of the explosion - Stalcup in the documentary and Hughes in a petition for reconsideration of the probable cause he sent to the NTSB on June 19.

Granted the crash on a Boeing 747 bound from New York to Paris was 17 years ago. Deadly Departure, my book on the accident was published in 2000 and a several other air disasters or near disasters have captured my attention since then. These are excuses for my first, slightly positive impression. After some memory-refreshing interviews and a briefing at the NTSB, I see now that Thomas Stalcup has added nothing new to the argument he has been making for the past decade and a half.

The "smoking gun" turns out to be a well-known and previously examined document, showing a cluster of radar targets in apparent close proximity to the TWA airliner just prior to the explosion. It is proof he says that the blast was high velocity (as in missile) not a low velocity (as in fuel-air) as the safety board concluded.

No radar expert is cited as the source for this opinion. No one at all in fact. In an interview in Virginia on Tuesday Stalcup told me he made the conclusion based on the NTSB report prepared by radar expert Michael O’Roark.

“The radar data shows a high velocity explosion,” Stalcup told me.  “I based my analysis on Michael O’Roark’s report.”

As a hired consultant to several agencies looking into the crash, O’Roark analyzed radar data from a number of reporting stations. When contacted by Stalcup to appear in the documentary, O’Roark agreed. They met at a hotel near Dulles Airport.

“He wanted to know about the radar,” O’Roark told me. That was fine with O’Roark. He knew the blips Stalcup was referring to.  “He’s got one little hit that first appears simultaneously with the fragmentation,” about a mile and a half off the right side of the airplane.

O’Roark said he told Stalcup, it could be the airplane, it could be a boat or a ship, it could be a false high-speed target.  Since a primary radar return doesn’t give altitude, there’s no way of knowing where in space the object actually is, or as O’Roark said, “Things that appear to be close together could be quite far apart.” 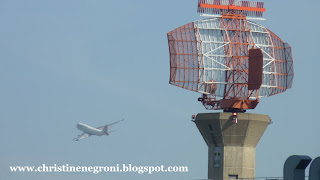 O'Roark quibbled with making any conclusion about the speed either. "Specifically I said, you can't tell velocity by the primary return until you get a second return." But by the time the radar swept by four and a half seconds later, there were 700 primary returns. Whatever happened to the plane had already happened.

Curiously, not a frame of this interview appears in the film. Perhaps because O’Roark also told Stalcup he thought the missile theory was nonsense. When I pushed O’Roark to think long and hard, asking “Is there any possible way, even if it is extremely remote, that the radar images you guys talked about could be interpreted to be a high-velocity explosion next to the airplane?” O’Roark said, “Call me in 3 hours, maybe then I’ll be drunk enough to think so.”

These men differ on the amount of ambiguity that can exist in something as seemingly definitive as radar data.

Who to believe? This is the question for viewers of the documentary and more importantly for people like Virginia Congressman Frank Wolf. Based on media reports alone he has already sent the safety board a letter asking for the investigation to be re-opened.

You have a guy like O’Roark, whose clocked more than half his lifetime in front of a radar scope, who in fact has been reading radar returns since before computers (Yep, he’s that old!). You have a guy like metallurgist Jim Wildey, with nearly 38-years of experience examining how materials fail in transportation disasters saying there is no evidence of "pitting, cratering, gas washing or petaling of the metal. No high velocity penetrations into the tank. All of those things are present when you have high explosives detonating near metal."

You have a guy like Bob Swaim who has eyeballed so much of the wire from the accident airplane he could run a line of it the length of Connecticut with wire left over. His precision led him to admit during the TWA 800 final hearing that he did not have the exact section of wire that triggered the blast.  In a remarkable overstatement and an under simplification, Stalcup concludes there is "no evidence" that wiring triggered the blast. 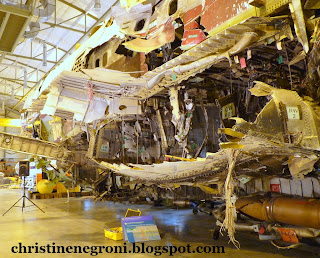 I really don't want to write about these conspiracy theory guys anymore. I don't understand their peculiar view that it is them versus the world and the rest of us are blind stooges to some vast all-knowing  government.

Still, I can't stop wondering, "What is it like to be Thomas Stalcup?", to think having PhD and small band of loyal acolytes makes one’s work superior to the investigators mentioned above, superior to the thousands of others - many with their own PhDs from dozens of academic, commercial and research organizations that provided their expertise during the four year probe?

Viewers susceptible to the manipulation of the movies may find the phenomenally hubristic Stalcup & company credible. If wiser and cooler heads don’t prevail, Borjesson's film may actually succeed in confirming Dr. Smarty-pants' inflated view of his own brilliance by convincing the NTSB to needlessly reopen its investigation.
Posted by Christine Negroni at 12:45 PM

so what is her point of writing this story? to knock the investigators? whose only point was that the real truth about what happened has not been brought before the public.
this part, she acts like a member of the klintoon admin, who wants to keep the twa800 story as an accident.
to paraphrase holmes, if the CIA video is known to be a farce, and, the center tank explosion theory is been proven wrong.
so what is left? choose: onboard bomb, or missile.
the visual damage, as seen in the reconstrcution pics, shows an external explosion casued some of the damage, the hole going through the fuselage, obviously an external source.
no,d ont write about reality, knock the critics who wanted to bring the light of day to this.

It is quite revealing when an author dismisses another's presentation as a "conspiracy theory" and, in making the argument, utilizes the same tactics of every "conspiracy theorist" -- desperately grasping on to one or two points and exploiting them at the expense of the logic of all the other evidence presented.

What's wrong Christine are you worried that if the NTSB reopens the investigation and their findings are consistent with the documentary then your credibility will be shot? Are you scared that people will look at you and think you should be serving drinks in the back of the plane instead of flying it?

Btw really enjoyed the books you authored subsequent to "Deadly Departure: Why The Experts Failed To Prevent The TWA Flight 800 Disaster And How It Could Happen Again"... writers block for the last 13 years I assume?

I have worked Avionics at TWA, on the Flight Line at JFK. AC 17119 was one on best 747 TWA had flying.
The day of that tragedy the FBI came to everyones home who had worked that flight.
The main inside truth is that during the 1970's Arab Oil Embargo
the FAA lifted it's restriction of Air Worthingness mandatiing that all fuel tank Scavenger Pumps be sumerged at all times.
Because the Scavenger Pump was a high torque D.C. Motor which continously ran at all times.
By lifting this A.W. it allowed the Airlines to substitute the takeoff weigth of fuel for cargo
which was a financial winfall.
This A.W. was re-instated after the air tragedy of TWA 800.
There were other fuel tank explosions after TWA 800.
You can contact one the law firms who represented the victims of TWA 800, such Lee Krindler and son aka Krindler and Krindler.
AC 17119 had the least of mechanical problems through TWA's 747 Fleet.

The problem with the missile theory is that anti-aircraft missiles fragment into thousands and thousands of high velocity fragments. Contrary to Hollywood physics, anti-aircraft missiles don't destroy their targets by blowing them up; they destroy their targets by hitting them with lots and lots of Mach 10 fragments. Only about one third of a warhead is high explosive; the rest is a metal casing that is designed to fragment. The warhead is designed to expel the fragments in a ring perpendicular to the missile's longitudinal axis, which combined with the missile's forward velocity, creates a cone of fragments. If an anti-aircraft missile detonated near TWA 800 it would have a huge swath of hundreds of holes on the fuselage and/or wings.

The problems with the "missile ejected debris shows up on radar" is 1) the warhead would have to be within a meter of the part that got ejected and on the opposite side from the direction it got ejected, in other words, it would have to have detonated inside the aircraft. No missile could detonate on the left side, or above or below, and expel something out the right side for 0.5 nautical miles. The blast effects decrease too rapidly for that to happen. If it detonated inside then obviously the aircraft would have tens of thousands of holes in it. And 2) no aircraft part could remain intact enough after getting shredded by hundreds of fragments to present a clean aerodynamic shape to get expelled 0.5 nautical mile. It would be about as aerodynamically efficient as a coke can after being hit with both barrels from 12 gauge birdshot from 10 feet.

The standoff distance for a 4000 lbs TNT truck bomb is 3800 feet, or .63 nautical miles. That is the maximum distance shrapnel can fly from that size of bomb. Are we to believe the largest US Navy surface to air missile warhead, which has 2% of the power of that truck bomb, could eject an aircraft part almost the same distance?

I vaguelky recall the round the clock media coverage of TWA Flight 800 back in the 90s and, like most people upon wathcing the Epix documentary was quick to believe it as gospel, however, th efact that teh documentary never even mentions that prior air disasters have in fact been caused by sparks in the center fuel tank immediately discredits it in my eyes, eyewitnesses or not.