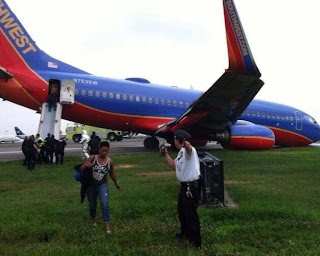 ALPA was none too happy that information about the pilots in command of Asiana Flight 214 was released by NTSB Chairman Deborah Hersman within days of the crash landing in San Francisco and the union's lobbying at L'Enfant Plaza does seem to have had some tranquilizing effect on the safety board's press operation, though spokeswoman Kelly Nantel chalks that up to the fact that the Southwest crash did not have a board member on scene.


Meantime, NTSB investigator in charge Dennis Jones is getting a big assist in the Southwest 345 probe from videos of the accident, at least two of which were made from inside the airplane.

A total of five videos - some from the passenger cabin and some from outside the plane - are valuable Nantel told me this afternoon. "It allows us to look from a variety of different angles." Digital evidence was "critical to determining what happened" in the crash of Jimmy Leeward's P-51 at the Reno Air Race in 2011, she said. 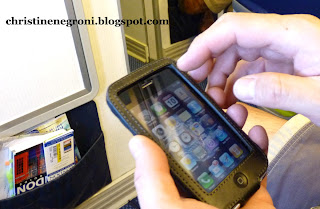 As I wrote for The New York Times  these days investigators of all sorts from safety agencies to law enforcement are deluged by digital evidence provided by citizen videographers and their ubiquitous smart phones, iPods, handy cams and tablets. At the same time it can be an overwhelming task for investigators to screen this stuff and evaluate its usefulness.

It that is not enough of a dilemma, don't forget that recording inside an airplane below 10,000 feet is in defiance of safety rules. Investigators have so far found no evidence that electro-magnetic interference from those digital devices affected the flight systems, instruments or controls on the Southwest 737 but the fact that could have should give one pause. And with that possibility in mind, its worth considering the implications when airline passengers feel it's okay to decide which rules they'll heed and which they'll ignore.

"The regulations are in place for a reason and we support them because they afford a level of safety," Nantel said. "Its always a concern when passengers feel they don't have to comply." 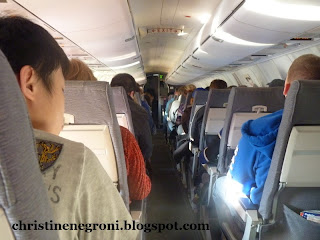 Nevertheless, in the case of Southwest 345 investigators find themselves in a dilemma, delighted and yet uncomfortable by the source of what could be illuminating evidence.  Asked what the safety board's next step might be to prod someone to sort out the air safety community's use-but-don't-tell relationship with digital devices, Nantel said, "There is no next step, it's up to the FAA to determine if there is some gross non compliance."

There already is gross non compliance that is easy part. The "what's next?" question will be a lot tougher to answer.

Posted by Christine Negroni at 4:37 PM

Are you kidding?
These "safety rules" regarding use of portable electronics (read: recording devices) are hopelessly out of date. While we're at it, let's put the kibosh on using
iPads in the cockpit below 10,000 ft. ;-)

Why would using a handycam or a digital device set to airplane mode (so it isn't transmitting any signal) as a video device cause any kind of interference with aircraft systems? Especially a handycam which doesn't have any kind of transmitter built into it at all?

Safety is diminished when rules are in place not supported by fact and reason.

Embarrassed much? Yes. Thanks for the correction on EMI.

I personally do not understand why it's so difficult for passengers to comply with some simple rules which MAY have an impact on the safety of all on board.

All it takes is ONE device, ONE time to cause that ONE bit of interference which may contribute to a mishap; how narcissistic of the passengers to take it upon themselves to potentially (not definitely) compromise the safety of the entire flight.

The rules may be antiquated, but they were put in place for a reason and until it is fully debunked that electronic devices do not interfere with aircraft systems, all passengers should abide by those rules. What is so difficult about shutting off your device for 15 whole minutes?

For those passengers who do violate the rules and post their things on-line or give them to the press, they should face violations of the FARs just as much as they'd face a speeding ticket for going 60 mph in a 30 mph zone. The problem is that everyone wants to be a star and everyone wants to sell their footage to the media before someone else does.

Maybe the airlines should start installing non-transmitting, electromagnetically shielded in-flight cameras in strategic locations in the aircraft to get views of cabin activity in the event of a mishap. Then you've got your footage and it's recorded on the FDR or such device and NTSB people don't have to search passenger devices or go to YouTube to look for footage.

The bottom line is that it just amazes me that people cannot separate themselves from their electronic devices for 15 minutes in consideration for their fellow passengers.