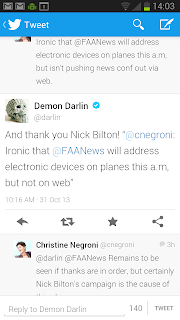 As I've written many times, both for the Times and for this blog, electronic devices interfer with airplane systems. In the report on which the FAA based its new policy, the panel of experts reiterate that much remains unclear about the impact of EMI emitting devices on air safety. Here are five of the many alarming points made by the FAA's advisory committee. 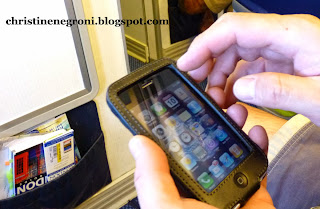 Those troubles and more, however, had to be balanced against a population of travelers who did not believe the worries were real and voted with their power on buttons.

Whether the electronics and inflight entertainment industry pushed their agenda I can't say, though Bilton quoted them many times. The Washington Post's Lydia DiPillis suggests that Amazon executive Paul Misener was a questionable choice to head up the FAA's advisory committee. (This took considerable courage since her new boss is Amazon chieftan Jeff Bezos.) 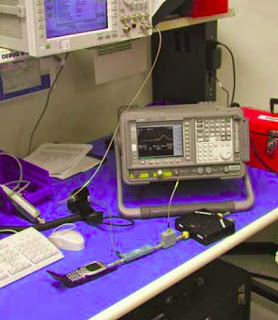 DiPillis' worry, that scientific ethics could be compromised by putting someone with a financial outcome in the decision in charge of fact finding could be true. Except, it doesn't appear that the committee's alarming conclusions were squelched at all. Reasonable people reading the report  have to wonder, "Is this really a good idea?" (See points made above, or read the report yourself by clicking here.)


The fact of the matter is that the facts don't matter. With a report that suggest safety issues exist the FAA welcomes the widespread use of devices on airplanes. The science takes a backseat to other factors that are social, political, economic and logistical.

So now we have an outcome. Whether its a good or a bad one, remains to be seen.


Posted by Christine Negroni at 2:24 PM

The fact is, regardless of the rules that are presently in place, there are dozens of devices on throughout the entire flight envelope, cellular antennae on and all. Most due to negligence, some due to indifference. If you ride as a passenger and pay attention to all of it around you, you've seen it. I know I have.

I captain airliners for a major carrier thousands of miles every week, and I have never seen even a hint of interference. I've always contended that "reports of interference by aircrews" is hogwash. Using NASA ASRS reports as "evidence" is ridiculous. It would be like using testimony from the defendant in a criminal trial as factual evidence. The science just doesn't support the claim that electronic devices present a significant risk.

Interference is not my main concern. Finding pax don't know what to do because they don't pay attention to the safety brief is. Finding a pax wads killed or injured by a flying ped during a landing accident is.

Profit before safety much?

Meanwhile, we have to remove our shoes - even if our foot attire happens to be paper thin flip flops - because some incompetent would-be terrorist hid a device he could ignite in his shoes.

Now the mobile phones are capable of doing almost everything that you can do on your computers.

The fact is passengers are able to read e-books, play games and watch videos through Electronic devices on planes at all times according to airline policies. However, cell phones must still remain in airplane mode with cellular service disabled.