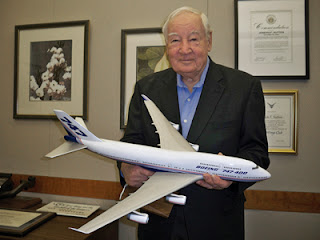 
“When we designed the 707," Sutter recalled, of the days before his 747 assignment, Boeing wrote the certification rules for the jet. "The CAA, the FAA wasn’t around yet, they didn’t know how to certify an airplane. We taught them how to do it,” before going on to create the domed wide-body 747 that still symbolizes modern aviation. During a dinner in New York, I asked him why, in the 21st Century, Boeing’s Dreamliner and the Airbus A350 have encountered so many delays and the 92 year old engineer explained the regulatory atmosphere is different now.

“It’s a very complex design progress heavily influenced by regulators, as it should be,” he told me. “Our world now is a more demanding world.”

A lifelong resident of Washington State, Sutter was brought to New York by Lufthansa to receive the airline's first Lifetime Achievement in Excellence Award.

I’m guessing, the large framed certificate and lunch plate-sized plaque will wind up in a room already cluttered with similar gifts, or what Ty Swensen of the West Seattle Herald described as the room in Sutter's home that “doubles as an ever-expanding museum of his life.”


Still, there were aspects of the celebratory dinner at the Lamb’s Club that had to be firsts even for someone accustomed to regular fetes. Runway Girl Network chief Mary Kirby moderated what was supposed to be a gentle question and answer session with Sutter, that had the engineer lambasting lawyers and criticizing airlines, correcting the questioner in the audience who speculated he must be treated like a VIP when he flies.

"On my recent trip I was treated like any other human being, which is almost inhuman," he said. And as the aviation geeks among us fed photos and tweets to our followers, Sutter paraphrased and expanded on the thoughts of American Airlines' former boss Bob Crandall.

Aviation is a tough business.If you want to make money, go into Twitter."

All three of Sutter’s children, Gabrielle, Jonathan and Adrienne and daughter-in-law Barbara were at the dinner. As the first European airline to fly the Boeing 747 forty years ago, Lufthansa made sure that two executives with skin in the game were also there; Nico Buchholz, the man responsible for the most recent airline purchase of 15 Boeing 747-800 jetliners and Norbert Woelfle, former head of the 747 fleet.

And just when the evening could have devolved into a lot of handshakes and stuffy speeches, the airline's director of corporate communications, Niles Haupt announced to the Father of the 747 that the music was about to begin.  At which point, German Korean cellist Isang Enders took to the stage and without a blue print or a wind tunnel in sight, took a night to honor an aviation legend and raised it to a whole new level.

Posted by Christine Negroni at 4:31 PM


It's sad that production of the 747 may be ceasing soon. Sales of the 747-8 have been underwhelming at best.

The 747 is the Empire State building of jetliners. It's not the largest anymore, or the flashiest, but it's still the classiest and most elegant. And like the Concorde, even after decades of service it never managed to look * old. *

On the contrary, the 747-8 is a sexy-looking plane, even as it stays true to the original 747 blueprint.

Or how about a nautical analogy? The 747 is the Q.E.2, the Rotterdam or the Queen Mary. The A380 is one of those bulky, top-heavy cruise ships that are everywhere nowadays, with ridiculous names like "Oasis of the Seas."

get over your prejudices.

Operators buy planes because they have capabilities which provide a return. Beauty is very much in the eye of the beholder and yours seems to have a decided set.

If I wanted an aesthetic airplane, I'd pick a sailplane. The others are there to make money (& I think the 380 looks fine, even though I've spent nearly 30 years with Boeings).

I remember my first flight in the 747 - climbing into the sun, Randolph Aviators on, kick back and enjoy the ride.

Great airplane many of which still flying today!

Nice post. Mr. Sutter is a hero of sorts. While the 747-8 may be the last of the line and not many will be built, many examples will remain flying for decades to come. Each edition has broken new ground and much technology developed for the 747 has migrated to other brands and models. And yes, the freighters remain the state-of-of the art. IT is nice to see Mr. Sutter so honored, even if he does not like flying!