Earlier this week, Lacinda and Spud Homfeld chose to celebrate their 36 years of togetherness by pursuing their separate interests with a two night stay at the aviation-themed hotel.  For a few hours each day, Spud and Lacinda could sit in the sun on the hotel’s outdoor balcony overlooking runway 14/32 and watch jets, planes and the occasional helicopter take off and land. 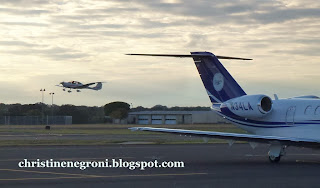 Later in the day the couple could mosey into downtown Fredericksburg for a meal and some shopping in the perfectly preserved historic town center.

Lacinda ought to be a wing-nut, her father was an air traffic controller in Houston. She told me when she was little, her dad used to take her to the TRACON where he worked so she could see what he did for a living.  Still, she was 30 before she ever flew on an airplane and the experience did not ignite any passion within her.

Her husband Spud, on the other hand, loves everything about airplanes. On a visit to Fredericksburg over Labor Day weekend, he was astonished to see the Gillespie airfield packed with planes. He decided to return and spend some time as a guest at the Hangar Hotel.

At first it does seem odd to place a $119 to $179 a night hotel and 98 hundred square foot conference center an hours’ drive from the closest metropolitan area – which in case you are curious is San Antonio. In reality, this tiny town, with a population of ten thousand is a hot destination for both the moneyed tourists who arrive here on private planes and ordinary folks looking for a relaxing getaway.

When I ask Dick Estenson, a private pilot as well as the owner of the hotel what attractions might lure aviation geeks to visit, he points out Fredericksburg’s proximity to the Mooney Aviation Company - for the past 60 years located in nearby Kerrville - and the Museum of the Pacific War. Mooneys have been out of production for the past five years, so I have my doubts about how much tourist interest the factory is generating at present. When it comes to the War Museum, Estenson has a point.

The Museum of the Pacific war isn't one museum; it is several - along with a large outdoor gallery detailing the role of the nine U.S. presidents who served in World War 2 and a Japanese garden that in its quiet way urges an end to conflicts like the one that is the centerpiece here.

The fifty thousand foot George H.W. Bush Gallery is the largest of the exhibit halls with a collection of Pacific theater artifacts that includes a Japanese float plane, a B-25 Bomber and a Grumman F4F Wildcat. The exhibits are placed in chronological order and present the stories of the people, the weapons and the battles.

Naturally, the museum draws a large number of visitors for whom the Second World War is part of their personal history. That specific group of museum goers diminishes each day but the museum recently completed a major renovation that visitors of all ages will find compelling.

Another Fredricksburg attraction for both aviation buffs and their disinterested companions is the Lyndon B. Johnson National Historic Park the former ranch of the 36th President, now run by the Federal Park Service.

Under a large canopy not far from the house that was called the Texas White House, sits the first plane to be assigned to carry a Vice President, a Lockheed JetStar VC-140. After Johnson became president, he continued to use the four-engine jet to get to and from the farm which has its own 6,300 foot asphalt runway.

Though all aircraft carrying a U.S. president are dubbed “One”, Johnson reportedly referred to the sixty foot executive jet as “Air Force One Half. The plane, the executive golf cart used to ferry him and visitors from the plane to the ranch are part of a terrific tour of the only federal park that captures the birth-to-death activities of a president.

Of course the history of Fredricksburg goes back much farther. It was settled by German immigrants in the 1840s and there was an unusually good relationship between the new arrivals and the Comanche who lived on the land at the time.  Much of the German heritage is preserved in the downtown area. On the lengthy main street, locally owned businesses display German/Texan products and the blended culture is evident in the architecture.

All this, and the 36 wineries within 25 miles of Fredricksburg on the Texas wine trail, explain how couples who differ about the romance of aviation can agree to spend time together, as Lacinda and Spud Homfeld did, celebrating their anniversary from an airport hotel.

Posted by Christine Negroni at 9:40 PM