A disciplinary commission in Chicago has upheld a censure decision against a lawyer who just last week came under its scrutiny for her behavior  related to Malaysia Flight 370.

Monica Ribbeck Kelly, who made worldwide headlines when she filed the first case against Boeing and Malaysia Airlines following the mysterious disappearance of the flight from Kuala Lumpur to Beijing in March, has been battling the ethics board of the Illinois Supreme Court since 2011 when she mishandled her representation of the victim of another crash.

In the earlier case, Kelly continued to file papers on behalf of Mustafa Gumus, who was injured when Turkish Flight 1951 crashed near Amsterdam in 2009. Gumus already had a lawyer when people from Ribbeck’s firm went to see him as he recuperated from surgery in the Netherlands. Whether from confusion, or the effects of medication is not clear but Gumus signed a retainer agreement with Kelly’s firm Ribbeck Law Chartered. Shortly after that he sent a letter rescinding his decision.

Monday's censure was a reaffirmation of an earlier finding that Kelly engaged in conduct “involving dishonesty, fraud, deceit or misrepresentation”. The three member review board’s decision was unanimous. “They found she had violated the ethics code,” said James Grogan, the deputy administrator and chief counsel for the ARDC.  The next step is up to the state supreme court which can adopt the finding or dismiss it, Grogan said. “They could suspend her or do whatever they think is appropriate.”

The only remedy Kelly has at this point according to her lawyer, George Collins, "is to petition the Supreme Court" to review.  Collins told me Kelly had not decided whether to do that.

Kelly’s problems with Illinois' arbiters of ethics got worse last week, when, as Lee Ferrin and I reported for ABC News, the ARDC charged the 47-year old lawyer with making a frivolous pleading following the disappearance of MH 370. Ribbeck Law Chartered petitioned for discovery in Cook County Circuit Court against Boeing and Malaysia Airlines claiming the plane went missing as the result of their negligence.

Given what we know about Kelly and other members of Ribbeck Law Chartered, that she has been accused of “wasting judicial resources” and conduct that is “prejudicial to the administration of justice” seems a little underwhelming.There is no mention in the complaint of a number of the firm's even more egregious activities.

Why none of these elements wound up in the ARDC complaint was mystifying to me, so I asked Grogan, who responded with a little semantic maneuvering of his own. 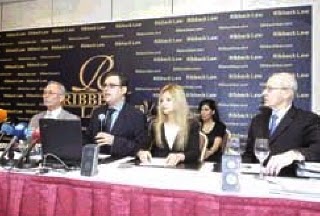 The average reader who is not savvy about how lawyers in the sometimes-lucrative world of air crash litigation, may wonder; "Why does an attorney bring a frivolous case? Isn't it embarrassing when an irritable judge tosses it out of court as Judge Kathy Flanagan did, and threatens to impose sanctions on the errant lawyer?"

The answer is this: The first to file a lawsuit following a high profile disaster, claims the next news cycle. And that puts the firm’s name in front of anyone looking for a lawyer. Some might call it a publicity stunt.That is the end game, the courthouse is just a stop along the way.

That’s my opinion anyway, not the ARDC’s. Still, in a hint of what may be in store for Monica Ribbeck Kelly the next time she’s before the folks who determine what lawyers ought not to do, Grogan did suggest more interesting developments could be forthcoming.

“We are a regulatory authority but also prosecutors.  We articulate a position at trial as prosecutor,” he said. “When you get to trial that’s when you see the motivations and the details.”

Posted by Christine Negroni at 8:43 PM