But be cautious about drawing conclusions based on the reaction of government officials concerned about protecting the lives of citizens flying out of the Egyptian resort town. It is the job of Prime Ministers and other political leaders to be prudent and investigate what could have happened to determine if a real threat exists. That's not to say what is worrying them is what actually happened.

It could be a case of political grandstanding with politicians leading journalists to the terrorism conclusion. It could be that journalists are taking ordinary caution out of context and making it something more conclusive than it is.

Either way, the wreckage and black box data will tell the tale. Which leads me to the thoughts of an experienced airline mechanic who upon studying the video of the Metrojet debris as shown on television told me this, 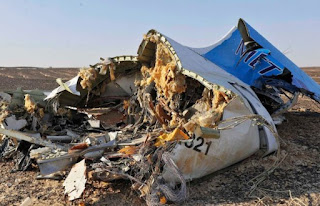 “Did you see how cleanly the tail broke off the Metrojet Airbus??? I'd bet my 401(k) on structural failure.” My mechanic friend, is just as influenced as anyone else by the media running off like a dog with a bone on the terror trail. Still after seeing new footage this morning, he came back to me a little less willing to put his retirement on the line, but still perplexed.

“I just find it peculiar how the tail broke off with straight lines rather than jagged tears.” Noting that the Metrojet plane experienced a tail strike several years ago and was repaired, my source added, “It conjures up memories of Aloha and Southwest -- structural failure.”

To be clear, what the politicians and unnamed intelligence sources are providing is not information about the accident investigation, it is what they are learning from their security investigation. That’s their job. What’s going on out in the Sinai is something else, actual tin kicking that will, if all goes as it should, not only determine the cause of the accident, it will identify previously unknown lapses in the system. 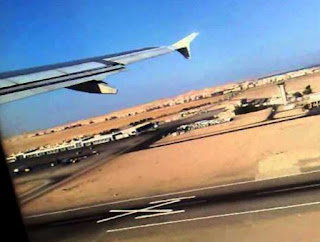 If the Metrojet flight to St. Petersburg blew up or came apart from some non-nefarious reason, it does not dismiss the validity of the hubbub over security at Sharm el Sheikh, though it does raise the question, why weren’t those security threats noted before the loss of 224 lives?

In this respect, it could be another case of Malaysia 17 where a failure to stay on top of security, allowed a disaster to happen.
Posted by Christine Negroni at 12:27 PM