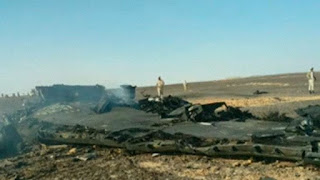 "We rule out a technical fault of the plane or a pilot error," the executive said at news conference in Moscow on Monday and adding fuel to the speculation that the Airbus A321  was brought down by a terrorist. "The only possible (sic) could be a purely mechanical external impact," Smirnov said.

Well he can say what he wants, but that won't make him correct. In truth, any number of events could have caused the airplane to break apart in flight especially considering the fact that the airplane was still in its ascent as it flew north from Sharm el Sheikh on the Red Sea to St. Petersburg.

The increasing pressure differential could have triggered a rupture at an undetected crack or weak point. This created all kinds of havoc on the first commercial jetliner, the Comet in the mid 1950s as you will read in my forthcoming book on aviation mysteries. In that case a series of design errors was to blame.

The A321 is unlikely to be harboring some heretofore undetected design issue. What is entirely possible is a scenario like what happened on Japan Airlines Flight 123 in 1985 where an inadequate repair subjected to repeated pressurization cycles finally gave way, causing a massive decompression and the loss of the Boeing 747's tail. Five hundred and twenty people were killed in the crash.

The Russian Metrojet plane reportedly had been damaged during a tail strike incident years earlier. Examining the company repair and maintenance records will be an important component of the investigation.

An altitude-triggering bomb could have caused the plane to come apart in flight, in an accident similar to the crash of Swiss Air 330 in 1970, and more famously, Pan Am 103 in December 1988. Or, a fuel-air explosion caused by some ignition source could be responsible.

It could be intentional like the bomb carried onto Avianca Flight 203 in 1989 and placed in the passenger cabin above the Boeing 727's center fuel tank. It could be unintentional such as a still-unknown ignition source that caused the center tank of a TWA Boeing 747 to explode on ascent from JFK Airport in 1996.

Speculation is the natural reaction to an unexpected event like a plane crash. No one expects the media or even the traveling public to be circumspect. But executives ought to be aware of their industry's own history and more, ought to be respectful of the fact that when the wreckage is still smoldering, it is not the time to make conclusive statements.

Mr. Smirnov is not the first to raise eyebrows with intemperate and inaccurate statements. I'm reminded of the public pronouncements of a few other airline bosses who would have been better off if they had relied on the communications professionals to do the talking for them.

Topping the list is Tim Clark, CEO of Emirates. He has been outspoken in accusing the Malaysians of covering up the truth about what happened to MH-370, which disappeared on March 8, 2014. In March of this year, he told Reuters the Malaysians had to know where the plane went because airlines have access to a "second-by-second flight path".

Someone from Emirates operations desk ought to send a memo to the boss, because out of radar range, the most conscientious carriers get position reports on a frequency of every several minutes not seconds, and that includes the planes in his own long haul fleet.

Granted, Carsten Spohr, CEO Lufthansa had to be stupefied on learning that GermanWings first officer Andreas Lubitz had commandeered a flight from Barcelona to Dusseldorf and flown it into the French Alps in March 2015, killing all 150 onboard. The young pilot had suspended his flight training due to a severe depressive episode, and was required to get regular medical reviews. So whatever possessed Spohr to tell reporters the day after the crash,  "There was never the slightest restriction on his competence and skills. He would seem to be fit in all areas."

Keeping track of the crazy comments of RyanAir's Michael O'Leary is a full-time job, don't expect me to keep up. I did note his total disdain of even the flight safety basics. A proponent of standing-room-only flights, he's perturbed about the requirement that passengers buckle up when hurtling through the sky. "Seatbelts don't matter," he said in 2012, data to the contrary be damned.

Among O'Leary's many colorful comments is his characterization of the irksome safety professionals obstructing his big plans.  "They're all a bunch of plonkers," he said. A quick check of the dictionary for the meaning of this British-ism shows me its got several, some not suitable for family reading (that O'Leary!). But it can be used to describe an idiot and who better than O'Leary to prove the point that it takes one to know one.
Posted by Christine Negroni at 11:46 AM