Thunder and Aerospace a Winning Combination

The term “play ball” is a metaphor for all sorts of transactions outside of sports. But it was the refusal of United Airlines to “play ball” with Oklahoma City that has brought the the Thunder to tomorrow night’s NBA playoff match with the Dallas Mavericks.  Before the basketball team was even a gleam in the eye of the Sooner State

, beleaguered citizens were casting about for ways to pump life into Oklahoma.

in the early nineties, flirting with communities in the Midwest for a place to build a massive maintenance and repair operation. When the Chicago-based airline finally selected Indianapolis despite the fact that Oklahoma City had offered a $200 million incentive package, the story goes that the then Mayor Ron Norick called United and bluntly asked, “Why not us?” 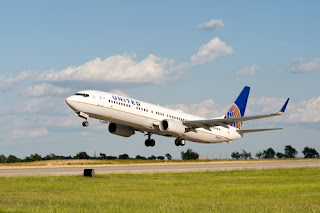 As Dave Lopez, the state’s secretary of commerce and tourism told me at a breakfast last month, the answer was as mortifying as being the last kid picked for a sandlot ball game; United executives "couldn’t imagine living in Oklahoma.”
That kick in the gut was prelude to the much more horrifying event to come, the bombing of the Alfred P. Murrah Federal Building

on April 19, 1995. The bombing “laid to waste the core of downtown,” said Victor Bird, director of the Oklahoma Aeronautics Commission. But like the rejection of United and several other economic development efforts, it brought Oklahoma City to a period of serious self-reflection.
“Our backs were against the wall,” Victor told me remembering that time. “If we want a place where our kids can stay and attract other talented individuals we’re going to have to make this city a better place.”
So Oklahoma City enacted a series of taxes for metropolitan projects - a penny-a-dollar contribution that would be a pay-as-you-go plan for rejuvenating downtown and beyond. One of those projects was a sports arena, built in 2003 as a place where the city might - if it was lucky - convince a hockey team to come stay. An effort to do just that was in the works in 2005, when Hurricane Katrina chased the NBA Hornets from their home in the New Orleans Arena

and the team needed temporary quarters.

“It had sell-out crowds. It was one of the top teams for attendance” said Harve Allen, who was a press room manager for the Hornets while they were playing in Oklahoma City and now does the same work with Thunder in addition to working for the aeronautics commission.  “Not only did it surprise the NBA, but in New Orleans and maybe even here, and we started thinking, ‘We could possibly do this.’”
When NBA basketball arrived, it united a state long-divided by college football rivalries. This is after all, a place where residents define themselves by their allegiance to either the Cowboys or the Sooners.  When the Hornets decided to return to New Orleans, Oklahoma City - with a feeling of new possibilities - approached the SuperSonics who were looking to leave Seattle in 2007.  As it had with United Airlines, Oklahoma City offered financial incentives and an eager population. This time, it worked.


And while United’s long-ago rejection is not forgotten, it has been put in perspective. “If it weren’t for our interest in aerospace, the chain of events leading to the Thunder being in the playoff would never have occurred,” the commerce secretary Lopez told me.
We were together on a tour of the state intended to demonstrate just how successful Oklahoma has been in developing an aerospace economy. The new sports fan base and enhanced quality of life, were just interesting extras as far as I was concerned. (As was the ironic conclusion to the United- in-Indianapolis story.  The airline closed the facility in a cost-saving measure in 2006.)
When I heard the news this morning of the Thunder’s latest victory I had to know what the folks in Oklahoma were thinking.
“It was one of those circumstances where God has other plans,” Dave Lopez said, positively giddy to see a place United executives once “couldn’t imagine living”, in the company of great cities like Miami, Chicago and Dallas. “The city’s team,” Dave says enjoying the metaphor, “is flying high.”
Posted by Christine Negroni at 7:59 PM