Chicagoans, be prepared for the woomph, woomph, woomph of helicopter blades comin' in from over Lake Michigan once the Children's Memorial Hospital places a helipad on its roof, 411 feet above the street.  At the end of last week, the Illinois Department of Transportation issued permission for the hospital to locate the high altitude helipad in a community of skyscrapers, community and concerned activists be damned.
It may be noisy, it may cause the values of million dollar properties on Chicago's Miracle Mile to decline but that's not the issue as far as I'm concerned. It's the safety stupid! 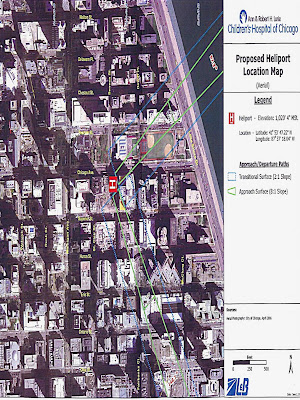 The helipad - one of only two this high in the country - will be located in an area dense with potential obstructions. The hospital's application listed 91 high-rise buildings in the vicinity, 12 shorter than and 79 taller than the hospital, with 31 more scheduled for construction in the future. Folks, this is a challenging environment in which to operate a helicopter without the additional factor which is Lake Michigan.
I lived in Chicago for 10 years but it took me 10 minutes to realize why its monikor The Windy City, is so apt.  Forget long-winded politicians, this is a city on a lake with winds that blow through the downtown area with such strength,  ropes are strung from building to building to give pedestrians something grab to keep from being blown down.
The debate over how to calculate the effect of Chicago winds took years. In granting permission to locate the helipad in this environment, state officials required a lower wind limit for operations than what the hospital requested.
Its way too little. What roasts me and others who haven't bought the myth that helicopter transport saves lives,  is the hospital's continued insistence that this perilous location is good for its future patients. This despite an accident rate that makes helicopter ambulances the most dangerous form of aviation next to flying in combat. The National Transportation Safety Board has held four investigations into HEMS (that's the handy acronym for helicopter emergency medical services ), concluding that the "accident record is unacceptable".
What's really behind the push, push, push for more woomph, woomph, woomph,  is the fact that helicopters make money for hospitals and for air ambulance companies like Air Methods, the for-profit corporation that is responsible for flying to the on-the-ground helipad at the present Children's Memorial Hospital in Lincoln Park. Air Methods, by the way, has about 22% of the $2.5 billion U.S. helicopter ambulance industry.
The hospitals incautious  request to perch a helipad in a valley of skyscrapers - residential, commercial and educational - should have fallen on ears deafened by the woomph, woomph, woomph of all the other ostensible life-saving helicopters in the past that were, in fact, life-taking.
That air ambulances can save lives is possible though various studies suggest otherwise. What's unambiguous is the fact that  patients and medical workers have been killed in these helicopters by the score.
And here to help you visualize that is former air ambulance pilot, Randy Mains who spent this morning bringing the truth on home at the Air Medical Transport Conference in St. Louis. First he distributed to the audience hundreds of envelopes telling the medical aviators to just hang on, they could open them shortly. 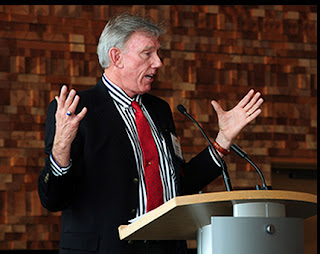 Randy is on a mission  making speeches and writing about how to make HEMS operations safer.
"I have watched in despair for over 32 years as the HEMS system in the U.S. has become more and more dangerous to where it is now officially the most dangerous job in America ."
Finally, the people in the audience with envelopes were asked to stand, 346 of them, about half of people in the room. Inside each envelope was the name of someone who died in a medical helicopter crash.

Randy's wife Kaye described what happened next. "All you could hear was the tearing of envelopes.  People really were in the moment and looking around, absorbing it. It was about two minutes with people standing. There was an overwhelming feeling."

"It was very satisfying, " Randy said, describing the stunt - a bit of dramatics intended to energize the people who do not want to imagined their own names on such a slip of paper in the future.
"We must design our programs in the States like they do it in Europe and Canada where they have excellent safety records," he said ticking off the requirements outside of the United States;  two pilots with current instrument-ratings and night vision goggles, in twin-engine aircraft. "Aviation safety doesn't care about egos, bottom lines or competition.  It only works if it is done right."
Crystal clear to an audience in St. Louis perhaps, but in Chicago what it looks like is safety done wrong.
Posted by Christine Negroni at 7:27 PM

Mr. Mains' comment that safety should be paramount is absolutely correct. However, no matter how safe the air ambulance sector becomes, the accident rate will never be zero. The only way to eliminate the risk is to not fly.

One of the primary missions of air ambulances is to transport victims of car crashes. Fewer traffic accidents would by definition reduce the number of air ambulance accidents. A given percentage of a smaller number is always less.

Air ambulance services, along with other first responders continue to put their lives at risk to help people who have been injured from preventable automobile accidents. Distractions like mobile phones, alcohol, food, fatigue, makeup as well as poor judgement result in no small number of air ambulance sorties. The elimination of the cost of those auto accidents would more than pay for all the desired improvements Mr. Mains advocates.

Yes, it is costly having these high tech, well equipped and staffed aircraft just standing by, but that is still far less expensive than flying them. And safer too!

Wow; treat the problem not the symptoms. What a novel idea! Just like "the war on drugs", we so easily dismiss the root cause and jump to the profit centers involved in the problem handling.
Putting a helipad in the center of a city covered in high rises with associated environmental problems seems remarkably stupid. A ground based field with ground transportation seems such a simple solutions by comparison. Why put our experienced, valuable operators in jeopardy when there are clear alternatives that can reduce risks and save lives?

I miss Meigs Field, but some domestic terrorist got away with destroying it a decade ago.

Normally I'll admit you DO know it all, but in this case you are not correct. You write, "One of the primary missions of air ambulances is to transport victims of car crashes." In fact, about 2/3rds of helicopter transports are moving patients from one hospital to another. Another industry myth shattered.

However, your overall point is right on. Distraction kills and there doesn't seem to be any turning back from our latest addiction to being constantly tuned in and consequently tuned out.

That's a subject for another day.
Christine

If you want to know the history of HEMS, read Randy's "The Golden Hour" (randymains.com) and his efforts to improve chopper safety over the past decades.

Seems as though little was learned, or even remembered, from the MLG failure of a NY Airways S-61 atop the Pan Am Building, that flung detritus over four square blocks of midtown Manhattan in May '77.