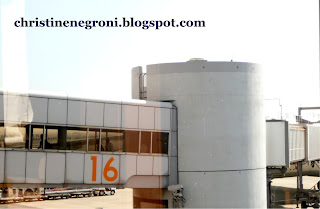 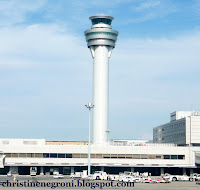 After a 3 year delay in actually receiving the Dreamliner from Boeing, the first airline to take delivery of the airplane of the future should be flying sky high. Instead A-N-A is reassuring passengers that everything is A-OK for the second time in six weeks.

On September 6th it shook up a planeload of travelers when a pilot trying to open the cockpit door to readmit the captain after a potty break, accidentally turned the wrong knob flipping the B737 on its head.

This latest episode had the ground crew towing the plane thisclose to the passenger boarding gate, scraping the engine cowling. Does it get any worse? Well kinda, inside the cowing beats the heart of a Trent 1000 by Rolls Royce, another aviation company that can't seem to catch a break.

Welcome to my Dreamliner nightmare? Nah, ANA says the damage was slight and the plane is good-to-go on its charter flight next week.  Just no more wasabi before bedtime between now and then okay?
Posted by Christine Negroni at 12:56 PM

The whole story may not yet be in on ANA's 737 "incident," but there's a strong suspicion that FO training was inadequate, coupled with cultural issues that have come into play where Captains are "infallible" and the FO's just "along for the ride." That was ultimately a primary consideration in an Air India 747 crash after takeoff, a JAL 747 freighter crash on takeoff from Anchorage, an Air China (?)AB-320 attempted go-around, and others. Although that has not been established in this ANA event, there's still a large gap in CRM between western and non-western cultures. (Just curious what ANA's requirements are for training prospective FOs before turning them loose in the cockpit. Anyone know?)

I won't make a joke here because it is very serious. However, "western airlines" have just as much exposure in this case as evidenced by the AF447 crash. The approaching world wide, and therefore domestic, pilot shortage will make it very difficult for airlines to find enough experienced aviators to meet their demand. How will the industry handle this? Will airlines lower qualifications or dramatically raise training requirements or both? Multicrew pilots' license might sound like a solution, but how does that solve the problem when those pilots are alone on the flight deck?