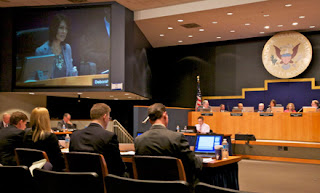 This was noted by none other that the NTSB Chairman Deborah Hersman as she spoke with reporters at the end of day one of the forum focusing on these batteries. The day was filled with facts and included several experts concluding that the technology may be pushing the limits of safety.

"The growth in the mission (of the battery) is substantial," said Glen Bowling of Saft Specialty Battery Group. "We are powering an airplane - the joint strike fighter - something that has never been done before, because it can be done. We are stretching the battery boundries and we have to be careful when we do that."

Surrounded by reporters and their battery powered devices, Hersman acknowledged the problem, "This is a technology that’s out there. The genie is out of the bottle. We’ve got to figure out how to mitigate these risks." 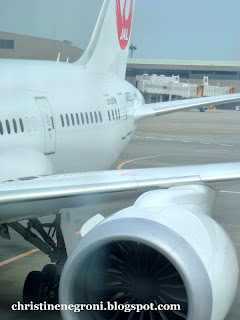 During the lunch break, I sat with two other aviation writers, Alan Levin of Bloomberg and Matt Wald from The New York Times. Both admitted they were astonished at the amount of press generated by the Dreamliner battery woes and both men have been around long enough for their observations to mean something. But interest slash concern about the risks inherent in  moving the little batteries on pallets in the belly of cargo planes? Not so much.

During her presentation, Janet McLaughlin of the Federal Aviation Administration said new estimates suggest lithium ion batteries can bring down an airplane at the rate of one every two years. (Would you like to pause here to absorb that figure?)

To bring home the point, she showed a video of a fire in a pallet of lithium ion batteries similar to what might be found on a cargo flight. Flames were firing out of the top and sides like Roman candles.

"We all know that lithium ion is hazardous materials." Ms. McLaughlin told the crowded hearing room in the basement of L'efant Plaza. But what was once about five percent of air cargo, has now increased to something as high as 80 to 85% on certain routes.  "That’s difficult to address." Ms. McLaughlin is a mistress of understatement.

"What their assessment shows," Hersman said of the FAA's upcoming one-crash-every-two-years report,  "is there is a real risk out there and we need to be paying attention to that."

Day two of the forum begins shortly. And something tells me, it will be more of the same grim news. I'll blog and tweet so whatever electronic device/s you use,  keep the battery charged and your fingers crossed.

Posted by Christine Negroni at 8:32 AM

OK, Christine, what exactly is an iTouch?

It is a kind of iPod. Remember those gadgets between MP3 players and smart phones? I use mine to record interviews and listen to music.

Hmmmmm......are you referring to the iPod Touch? Ok, I promise not to harass you anymore...lol. This one was just too hard to resist! Keep up the fantastic writing!