Leery of O'Leary, Ryanair's Charm Offensive Must Begin at the Top

You heard it here first, folks; Ryanair, the airline passengers love to hate, has a plan to turn on the charm. And just in time, it would appear, given the ransacking of one of its planes in Nantes, France earlier this month.

The 170 passengers were reportedly aggrieved when their flight from Rabat to Paris was delayed and then diverted due to the illness of a passenger and then a nighttime limitation on arrivals at the Paris Beauvais-Tille airport.
Press reports say that the passengers revolted, stealing food, perfume and cigarettes from the airline's onboard store. Passengers say after being stuck for seven hours on a flight scheduled for two and a half, they were merely helping themselves to "drinks and food." "People need to eat," one unidentified traveler told the French news site, Metronews.

For an event like that, I blame the man at the top, the notoriously coarse Michael O'Leary, who doesn't seem to be happy unless he's agitating someone, somewhere. There's a remarkable similarity between the Irish airline boss and Chris Christie, the governor of New Jersey.

Governor Christie is in hot water these days because his former top staffer seems to have pulled some strings to create a 4-day traffic jam into New York City, by closing lanes on the world busiest bridge. This was intended to punish an area politician who declined to endorse Christie's re-election bid.

Christie and O'Leary are highly self-confident but famously impatient with others. Both are powerful salesmen; Christie sells to voters. O'Leary sells seats and anything else to travelers on his low cost carrier. Both have a history of contemptuous behavior that has bruised feelings and engendered hostility.

Whether Governor Christie knew that his underlings were hatching a plan to create chaos for commuters last summer is the subject of several investigations now. But as far as I'm concerned it is irrelevant. He created an uncivil tone at the top and disrespect trickles down.

Now comes news that Ryanair, pioneer of what is euphemistically called the "minimal convenience" model of air travel wants a more gracious image. In November, O'Leary told the Guardian "Were moving away from making noise to actually communicating with people." 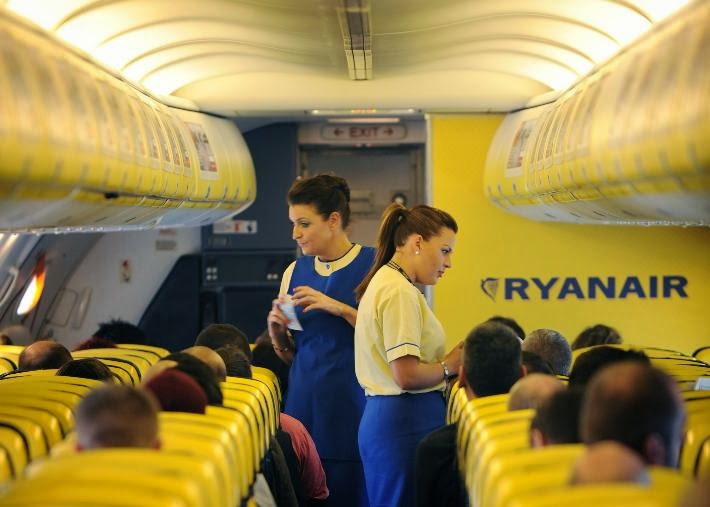 But several years ago, in another attempt to attract a higher class of customer, O'Leary characterized his planned business class service as offering "beds and blow jobs."  When video of the news conference went viral, O'Leary was not only not apologetic, the company issued a press release celebrating the number of hits his crude comments received on YouTube.

So don't talk to me about the hooligans on Ryanair's flights. Best I can see, aviation's bad boy has created an airline in his own image. If he's looking to make change, it's clear where he needs to start.
Posted by Christine Negroni at 4:45 PM

You must watch this hilarious spoof on a Ryanair training session to teach its staff to show the airline's new passenger "caring" side: http://www.youtube.com/watch?v=UNUJ_td7eJc

I won't hear a word said against Ryanair - a quite remarkable operation. Every flight I have taken with them has been on time and by paying a little more I have secured extra leg room seats and priority boarding at over 50% cheaper than an equivalent Lufthansa flight.
The only criticism is that the cabin crew inflight announcements are mostly incomprehensible...

I have also reported them to the Irish Aviation Authorities for not manning the exit seat rows for take off and landing but that's another story....http://nikoscosmos.blogspot.co.uk/2012/03/row-about-two-rows.html