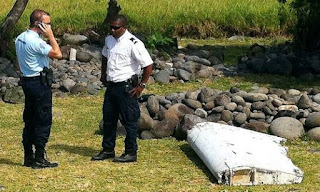 The section of wing found on Reunion Island in the South Indian Ocean last week came from missing Malaysia Airlines Flight 370, or at least enough of a positive identification was made today for the Malaysian Prime Minister Najib Razak to announce he's satisfied.

While not a surprise to anyone who has seen or read the news since the part was found on a rocky beach, Razak’s statement is a six foot bit of certainty in the still-mysterious disappearance of the Boeing 777 on March 8, 2014.

Even the confirmation today is not without equivocation, as Razak says yes, and others say, probably. The Prime Minister sees this as the first positive proof that the plane did crash in the sea and I'm guessing he's eager to be the one to share the news. That's the only explanation for getting out there ahead of  everybody else.

Behind the suspense, I am told, is the fact that the wing flap’s serial number is not visible without actually disassembling the part. And no tear down could proceed without examining and documenting the piece as it first appeared.

Since the weekend, engineers and scientists have been putting together a protocol setting the order of testing before the actual destruction for purposes of further exam and identification could begin.

Fingers are crossed that more interesting news will follow, that news to include what if anything the exam indicated about the flight and the plane’s impact with the water.

In his statement, the Prime Minister promised families of victims that the government is “committed to do everything within our means to find out the truth of what happened.”

That can be talk or that can be action. If the nation’s leader wants to prove it is the latter he will show the families, the public and all those working on the case, just what his country has learned so far. There’s a deep well of information right in Malaysia about which we’ve heard very little.


I’m talking about the airplane's maintenance history and all that intriguing cargo on board. What if anything has been learned about whether any of the hundreds of cell phones on the plane received or transmitted to towers as the plane crossed the Malaysian peninsula? And for heaven’s sake, what progress has been made on that perplexing loss of power on the airplane two hours into the flight and shortly before it turned south for the last time and flew into oblivion?

Black boxes are great, wreckage is fine. But not all the clues reside there. To fulfill the promise Razak reiterated today, the Prime Minister will pressure his folks to do more and share more. Now that investigators have a piece of the wing, let’s see how more transparency flies.
Posted by Christine Negroni at 2:53 PM