A Soprano-Like Shakedown Squeezes Smisek out of United

United's boss Jeff Smisek resigned from the airline today, as a probe continues into whether he and other top executives agreed to provide favors for a government official in New Jersey.

In a statement, United says it has been cooperating with a federal investigation and in fact, that the airline had conducted its own probe into whether David Samson of the Port Authority of New York and New Jersey demanded the airline reopen a route to Columbia, South Carolina in exchange for the go-ahead on several airport projects at Newark Liberty International Airport.


As reported by Bloomberg in April, the story reads like an plot from the hit TV mob show, The Sopranos. Samson promised when he became the top dog at the PANYNJ that he would "use the Port Authority as an engine for economic development and jobs in New Jersey." Instead he seems to have been more motivated to use his position as an engine to enhance his personal convenience. And conveyance.

In a dinner meeting with Smisek in September 2011 and reported by the New Jersey newspaper The Record, Sampson complained about the 150 mile drive from Charlotte to his vacation home in South Carolina. Why didn't United just reinstate the Columbia flight it cancelled in 2009, he reportedly asked the airline boss. 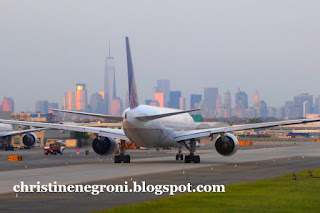 United had several very big ticket projects at Newark that it wanted approval for including the development of a rail link from downtown Manhattan to the airport, a wide-body maintenance center and terminal improvements. There must have been some heavy duty number crunching by the airline after the dinner bill was paid. How much would it cost to open a route previously considered unprofitable to accommodate one VIP traveler and his wife? How much greasing of the wheels would it be worth?

The math must not have added up because the flight dubbed the "chairman's flight" didn't happen immediately. In the story reported by David Voreacos and David Kocieniewski, Samson seems to have continued to put the squeeze on United, tabling agenda items the airline wanted considered by the Port Authority. Once United started offering twice weekly service to Columbia, wouldn't you know United started seeing green lights for its development plans.

Corrupt politicians can be found anywhere, so I should not be surprised. Especially considering Samson's patron is Governor Chris Christie, a candidate for president linked with the George Washington Bridge-gate scandal of 2013, and also because of how the New York area airports fail to stack up compared to other international airports I've traveled through. The Port Authority's dysfunction is obvious to anyone who travels by air.

Frankly, when you read the details of the shakedown, its hard not to feel sorry for Smisek. Airline executives often complain that when it comes to the government, they are either being scolded or ignored. The lesson is that if you treat an industry like a naughty child you might just get the bad behavior that goes along with it.

Posted by Christine Negroni at 10:53 PM