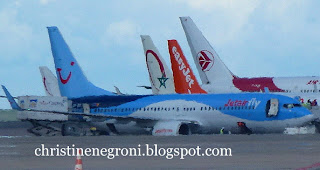 Fifteen hundred airlines worldwide, 24 thousand airplanes, $2.2 trillion (yep, with a T) in economic benefits; those are big numbers that sure get my attention, though it's less certain if presenting facts to busybody lawmakers will convince them to back off from regulating every little thing having to do with airlines. But, hey, ATAG, good luck with that.

Airlines, with their fancy, schmancy, advertising campaigns provide the emotional impact. From Ecuador's Tame Airlines Give Me Wings campaign to Etihad's Beautiful Things music video and Turkish's Globally Yours, one can almost forget that contemporary air travel is widely viewed as a hours of hassle with hours of discomfort layered on top.

Then there are the people who work in aviation, 56.6 million strong (Thank you IATA) who, from cleaning cabins to commanding cockpits, are poets and romantics. Say what they will at contract negotiation time, a lot of them still can't believe they get paid to fly for a living.

I like that there are many facets to the appreciation of aviation. They hit every button.  And so I thought I'd share one-lesser known inspiration, as described by Trinidad's Lord Kitchener, (AKA Aldwyn Roberts) in his song, Jump In The Line. The reason for aviation in his tune? Señora.

I leave you to your weekend, tapping your toes and swinging your hips with this calypso beat. Just remember,  in Greek mythology, Calypso was the dominating goddess, the daughter of a Titan who held Odysseus captive. Parallels to aviation? You be the judge.

Señora, she's a sensation
The reason for aviation
And fellas you got to watch it
When she wind up, she bottom, she go like a rocket!

Posted by Christine Negroni at 2:24 PM