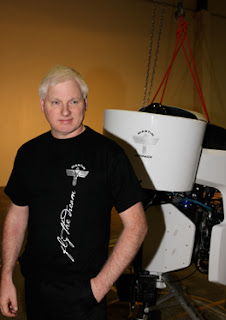 -like one-person, vertical takeoff aircraft. It's the real live version of the transporter my son Joseph has been asking me to make for him for years. Only in Martin's case, its actually flying and there's a good chance it will fly commercially, too.
In Auckland, I had a coffee with Peter Beck, founder and chief of Rocket Lab  who is working on a number of projects;  economical and effective launching of small mass satellites for businesses and rapidly deployed rocket systems for defense forces. This is a company of maybe a dozen or so science geeks whose work is challenging large, bureaucratic and expensive European and American aerospace contractors.
Martin Aerospace and Rocket Labs are on the cusp of remarkable advances and yet they are working in relative obscurity.
Is Gates right that aviation has connected the world of ideas? Or is geography still playing a role in destiny as it did in  Richard Pearse's day? Across New Zealand, in dusty hangars and unexceptional business offices there are examples of dazzling inventiveness beneath the veneer.
Whether a modest public front is itself another characteristic of the Kiwi personality, I can't say. But I can testify that extraordinary things are going on in New Zealand, keeping alive a tradition as simple as the re-purposing of number eight wire and as daring as Richard Pearse's dreams.
Posted by Christine Negroni at 4:14 AM