I'm going to get vulgar here, but in my defense, I didn't start it. I'll lay the blame at the highly polished brogues of television personality Richard Quest. Spiffed up with just the right amount of French cuff revealed at the sleeves of his perfectly tailored suit jacket, Quest was clearly on a hunt for trouble on Monday at the International Air Transport Association annual meeting in Beijing. 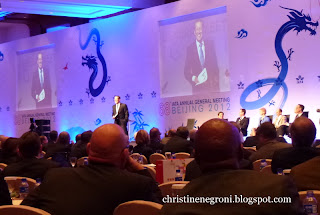 In what might be considered putting a stick into a bucket of you-know-what and giving it a stir, the CNN host asked provocative questions of his panel of airline executives and got back as good as he gave when he took on the quarrelsome boss of Qatar Airways, Akbar Al Baker. 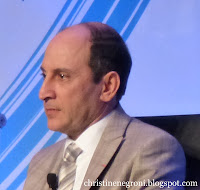 Asking if al Baker was satisfied with his new role on the board of governors of the group, Quest suggested that the scrappy airline exec's presence in IATA's inner circle reminded him of something once said by US President Dwight Eisenhower; "Better to have you on the inside pissing out, than on the outside pissing in."  (Quest misattributed the quote. It was in fact said by US President Lyndon Johnson. Still, we got the point.)

In making the jibe, Quest waded in to the thicket created last year when al Baker took on the controversial outgoing director general of IATA, Giovanni Bisignani accusing him of high handedness and excluding from important decisions in the association, the up-and-coming Eastern carriers including those in the Gulf.

Bisignani is gone and the opinionated al Baker, is not. Far from it. He was sharing the stage with executives of Qantas, Cathay Pacific and Thai Airways.

"I will still piss when I'm not satisfied," al Baker told Quest. Promising or perhaps threatening more rain could fall on IATA's parade.

As airline members complete the first of two days of meetings here, Quest prompted the panelists to talk about their frustration over a lengthy list of challenges they face from fuel prices, to Europe's emission trading scheme to the fact that airlines are - as Qantas boss Alan Joyce put it - "easy cash cows" for governments to milk.

But nobody spoke as bluntly as al Baker. The regulators "think the sun shines through their ass*****"  he offered, and even Quest, who started it all seemed startled.

Lest I lead you to believe the entire session was potty talk, it was not. Some time was reserved for the less sensational opinions of the other executives. Joyce in a fit of optimism predicted that next year, many of this year's problems will be resolved and airlines will be flying high.

But it was Piyasvasti Amranand, the (recently sacked) leader of Thai Airways whose speculation was most in keeping with Quest's tone as trouble-making moderator.

"Next year" he said, IATA members will be talking about the same old problems, problems with fuel, problems with labor, problems with regulators, even "the same problems we've been having with Akbar al Baker, " and neither Quest nor al Baker had a rejoinder to that.

For non-aviation news on my visit to China, click here.

Colorful language is not necessarily a requirement to be effective in an operations oriented environment, but it is a common characteristic of those who are. The former Continental CEO, Gordon Bethune, comes to mind. He was never at a loss for a colorful "one liner" to make his point. In addition to his vocabulary, Mr. Bethune also received a hands on education on how the world really works in the US Navy as an enlisted sailor as well as an officer.

People who know how to get things done often become frustrated with colleagues that seemed more committed to studies, meetings and conferences than actually accomplishing operational objectives. They think that the success of an airline is rooted in policy and procedure. Herb Kelleher understood that success comes not from management, but rather from the employees that management needs to inspire, motivate and encourage. A policy manual alone does not a culture make.

Arrogant and ineffective managers, inept regulators, ideologically driven labor leaders are the parasites of the airline industry. They are all "drag" no "thrust". It's hard enough these days to deliver a safe and quality product within a diverse and complicated environment without having to be the "bi*ches" of narcissistic managers, labor leaders and regulators.

I suppose all the points could have been articulated in a civil manner. There was no need for colorful or potty language.

The issues remain valid. Government taxation of the industry will limit the amount of indirect revenues that will accrue for added employment, trickle down effect to the economies due to healthier more robust industry.

As a career airline employee from the honey bucket, baggage train to the flight deck; colorful language is the norm at almost every airline. If it weren't for the flamboyance and hard partying, airline work would be hard to put up with and very hard work seems to generate very hard play. Like it, or not; that has always been the norm.