Potty Break Puts Airline Passengers on the Ground During Quake

Shortly before the earthquake struck Japan on Friday afternoon, a jumbo jet pushed back from the gate at Narita Airport, preparing to depart when a passenger got up to go to the bathroom. As my friend, pilot Jim Karsh tells the you've-got-to-be-kidding tale,

"Of course you can't take off with anyone out of their seat, so the purser called the cockpit and the flight was held until the passenger finished in the restroom and was reseated."

Unfortunately, that potty break couldn't have been more ill-timed. The delay kept the 747 on the ground which was now rockin' and rollin' and another 300-400 passengers were added to those stranded in Tokyo, one of the world's busiest air hubs.

philosophy is the story of lovely Sendai Airport in Miyagi Prefecture, which is much closer than Tokyo to the center of the 8.9 quake.  View these before and after photographs to see the power of the tsunami that followed the quake as it washed across the Sendai Airport airfield, sweeping heavy tugs along like toys. Note the people standing on the roof as the wave rolls through.

You may find yourself asking, "Where are the airliners?"  I know I was. So I asked my intrepid correspondent Takeo Aizawa to do a little sleuthing and he discovered the answer was once again, the whimsy of fate.

"It was kind of lucky there were no planes at the time of the earthquake," he told me via skype this morning, because there should have been. JAL Flight 2209, an Embraer 170, was scheduled to land  nine minutes before the quake hit but it was delayed on departure from Osaka. "It takes 76 minutes from Osaka to Sendai, so 50 minutes late departure means very safe distance from the quake," Takeo-san explained. Flight 2209 was in the air when the earthquake hit and the pilots were instructed to return to Osaka. Some very lucky passengers were delivered from the teeth of disaster.

Sendai Airport operates eighty commercial flights a day and in the fifty minutes prior to the quake, three airliners, a regional jet and two B737s took off. The quake and the tsunami that followed an hour later did wicked damage to the airport but not a single jetliner appears to have been lost.

"The tidal wave was more dangerous than the quake itself," Takeo-san said via skype this morning. When I first heard about the quake, I worried about my friend Takeo-san even though we've never met in person, I feel I know him from working on a story about the Goodwill Guide program following my visit to Japan last fall. I was delighted to hear that he and his wife were okay with no greater damage to their home than a lot of broken glass to clean up.

After seeing the destruction at Sendai, its clear that while the city of Tokyo and the two international airports that serve it; Haneda (Tokyo International) and Narita International were places of drama on Friday afternoon, as this You Tube video shows, for the most part the quake was not much more than a very scary, very messy inconvenience in this part of Japan.


The news today from Tokyo's big airports is that congestion in the terminals is thinning as airlines move back to their regular flight schedules. My friend Jim, who flies a B747 for a U.S. carrier and who had a 96-hour layover in Tokyo (read his story here) tells me he's killing time talking to the excellent employees at the Raddison Hotel Narita Airport, (I've stayed there, he's right, they're great.) And hangar flying with the other flight crews staying there. 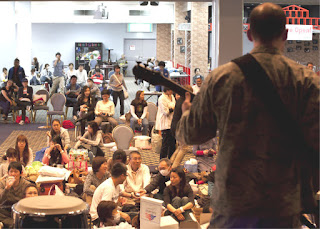 "Some of the pilots I talked to at breakfast were on the way into Narita when the earthquake happened and were diverted," Jim told me in an email. The U.S. Air Force says eleven planes were diverted to the base at Yokota, but not all were permitted to stay.

"One went to Yokota then flew from there to Haneda, then on to Narita." Jim said that he was told, "Japanese customs would not let the passengers off the airplane in the first two airports, so the passengers and crew were on the aircraft for 32 hours until they deplaned in Narita."

I hesitate to bring this up, since I know the passenger bill of rights crowd is always looking for new recruits, but the 529 passengers and 29 flight crew members who did get off the plane at the air base were fed, treated to entertainment by Staff Sgt. Anthony Schmaus from the U.S. Air Force Band of the Pacific and put up for the night.

Some folks had it easier than others. Ernie Gann nods knowingly.

Posted by Christine Negroni at 9:34 AM