Air Crossing of South Atlantic Then and Now 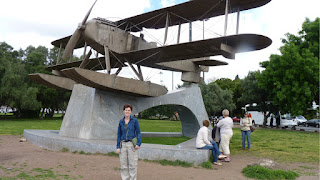 LISBON - The Fairey single engine float plane is displayed as if taking off over the Tejo River. But when Gago Coutinho

departed Lisbon in the first crossing of the South Atlantic by air in 1922 they were not flying in this particular airplane. Their historic feat was only accomplished in a three airplane relay, the first two planes were lost along the way. But in such perseverance is aviation history (and aviation safety) made.

This was made clear to me again on Sunday. As I was learning about these Portuguese aviation pioneers and their ultimately successful travails in flying from Portugal to Brazil, air crash investigators with the French Bureau d'Enquetes et d'Analyses or BEA were rewarded by their own travails in the South Atlantic with the discovery of wreckage from the Airbus A330 that flew as Air France Flight 447

. The so-far mysterious crash of Flight 447 from Rio de Janeiro to Paris nearly two years ago, has been as loaded with drama as it has been light on details.
Remember the plane carrying 228 people was at cruise altitude when, after a few minutes of automated maintenance warnings to Air France through the ACARS system, the plane disappeared. Since then, the only operating theory is that ice in the speed-measuring pitot tubes caused incorrect readings by the autopilot leading to the crash. All Thales pilot tubes were ordered replaced by aviation authorities.
Despite the fact that no one yet knows what happened to Flight 447, the French government recently filed manslaughter charges against Airbus and Air France. You read that correctly. This is not an unprecedented step for the French. Continental Airlines and an employee were found guilty of manslaughter in France just three months ago for the crash in Paris of the supersonic Concorde in 2000 that killed 113 people. (That ruling that got remarkably little attention, frankly. Continental says it will appeal.)
It is quite obvious that everyone wants to know more about what happened to Flight 447, making the $40 million plus cost of the repeated underwater searches bearable - in spite of the continual raising and dashing of hopes from the previous fruitless searches.
The Portuguese naval aviation pioneers Coutinho and Sacadura left Lisbon in March 1922 on a three-month effort to fly to Rio de Janeiro using a sextant they designed for air navigation. The journey required multiple stops for fuel along the way and cost three airplanes.
During one sea landing gone awry, the pilots found themselves in the water holding on for dear life to the floats of their sinking aircraft. Undoubtedly they must have had their doubts. But through the efforts of many people, the aviators were rescued and they prevailed. They entered the history books yes, but just as important, they left a legacy of determination entirely relevant today.
Posted by Christine Negroni at 5:08 AM

Regarding Air France 447, If I remember correctly, the Pilots body was found floating.
That seems to tell me that perhaps he was not strapped in due to he was moving around (Stretching, restroom) and maybe everything was ok at this time.
What happened , evolved very quickly to the point where he could not get back to the "Left seat"? Such a strange mystery.For families involved, I keep in my prayer.
Dan Delaney

Yes, they established that the captain was not in the cockpit at the time. There were two more junior pilots on the flightdeck.

This may or may not have a bearing on what happened once the system warned of inconsistent speed readings.

At some point the autopilot disengaged but it's not known whether this was a deliberate act by the pilot(s) or something that happened automatically.